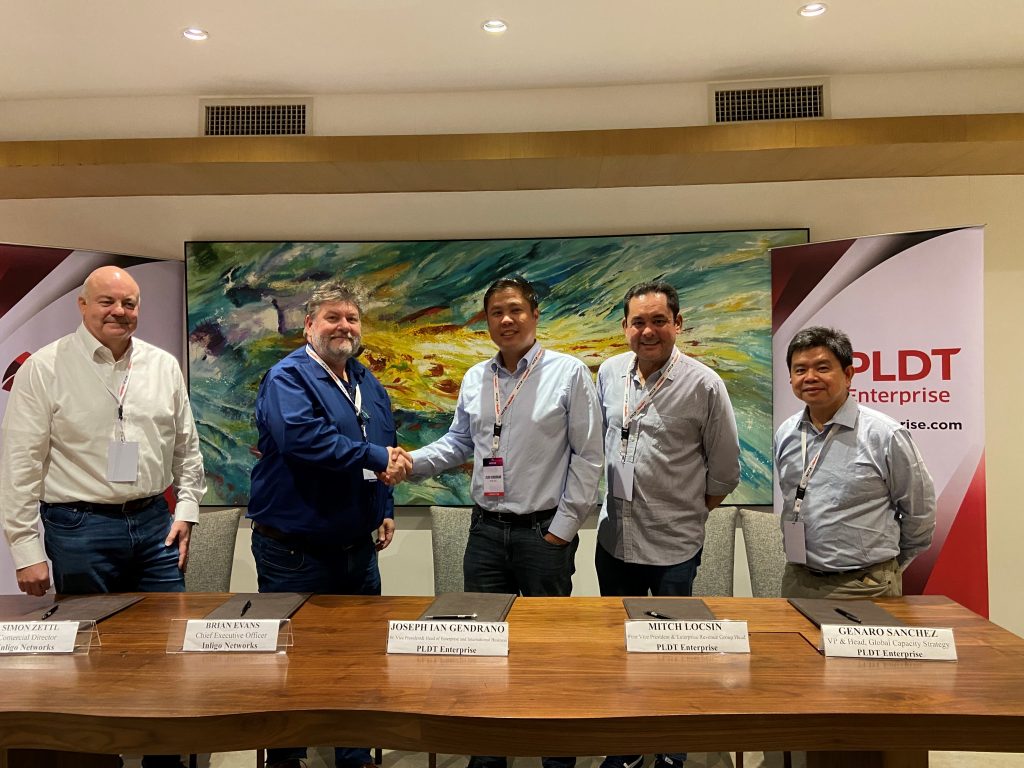 Inligo Networks, a privately-owned designer, builder and operator of subsea telecommunications networks is pleased to announce the addition of a branching connection from its Asia Connect Cable (ACC-1) into Davao in the Philippines. Inligo’s ACC-1, which stretches from Singapore in the West to Los Angeles, USA in the East, will be one of the highest capacity subsea systems installed between Southeast Asia and the United States, providing much needed connectivity between the rapidly growing economies of Southeast Asia and the United States via an optimized southern route through the Java Sea.

ACC-1’s newest branching unit, which shall be referred to as the Davao branch, will be enabled by Inligo following the signing of a Memorandum of Understanding (MoU) with PLDT Inc. (PLDT), the Philippines’ largest fully integrated telecommunications carrier, at the recent Asia Carriers Conference held in the Philippines.

Partnering with the largest fully integrated telecommunications carrier in the Philippines

Under the MoU, Inligo and PLDT will negotiate the terms of the definitive agreements of the proposed landing opportunity in Davao, located in the southern Philippines. Based on the current discussions, PLDT will serve the Cable Landing Station (CLS) requirements of the Davao branch.

PLDT has been active in the subsea cable market, having recently inaugurated the Jupiter cable system, which connects the Philippines to Japan and USA. PLDT also has investments in the Asia Direct Cable system, which runs from Singapore through the South China Sea to Japan; and the APRICOT cable, which is planned to connect the Philippines to Japan, Singapore, Indonesia, Taiwan and Guam; and which are set to be completed in the next two years.

Apart from ongoing discussions for the Davao branch, the ACC-1 provides a high level of intra-Asian and transpacific connectivity, with confirmed landings in Singapore, Batam, Jakarta, Makassar, Dili, Darwin, Manado, Guam and Los Angeles. Inligo Networks ACC-1 consists of a design capacity of approximately 256Tb, running via 16 fibre pairs and operating as an open cable system utilizing the next generation WSS ROADM technology – the next-generation Wavelength Division Multiplexing technology allowing highly flexible routing of capacity to any and between any point on the cable system.

Inligo Networks’ Commercial Director and Chief Revenue Officer, Simon ZETTL was quoted, “The Philippines is a significant growth market in terms of data consumption, creation and distribution, and having a mature and dynamic partner such as PLDT to assist us in supporting this growth is a partnership we are confident will bring long-term mutual benefits to both our organisations. We look forward to working with PLDT through this next phase of discussions.”

Inligo is excited to be working with such a dynamic company as PLDT, who clearly understands the critical importance of high speed, low latency connectivity in and out of the Philippines to continue to attract foreign investments, provide superior services to its consumer and enterprise customers, and provide the foundation for continued expansion and development of the rapidly growing data center industry.

According to Jojo Gendrano, SVP and Head of Enterprise and International Business Group at PLDT, “We are pleased to have this MOU with Inligo as they add a branching connection from the ACC-1 into Davao, because it is aligned with PLDT’s mission to make the Philippines the next hyperscaler destination of Asia-Pacific. PLDT Davao CLS where ACC-1 will land will be directly connected to PLDT’s robust domestic fiber optic cable facility and network of data centers across the country. We see this partnership as an opportunity to further enrich our connectivity ecosystem and strengthen the Philippines’ advantage as a strategic digital hub in the region.”